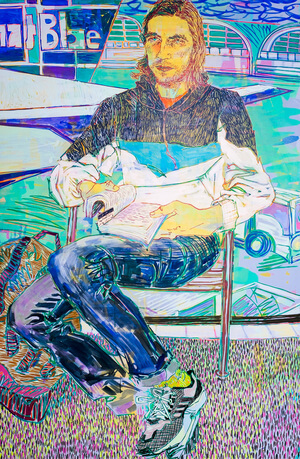 Life in color through the eyes of Hope Gangloff

Who: American painter Hope Gangloff, who lives and works in New York City. She studied art at The Cooper Union for the Advancement of Science and Art. Before her art career took off, after art school Gangloff worked in a bronze factory and drew illustrations for publications including the New York Times, The New Yorker, Spin Magazine and Built By Wendy.

About the artist: The artist’s work has been featured around a world. A few places where her art has been exhibited include the Susan Inglett Gallery in New York City; Richard Heller Gallery in Santa Monica, CA; Morgan Lehman Gallery also in New York City and the Adamson Gallery in Washington D.C. Her work is in museum collections at the Broad Art Museum, the Kemper Museum and the Pennsylvania Academy of the Fine Arts, as well as the Cleveland Clinic and Altura Foundation.

As a solo artist, Hope has had exhibitions at the Broad Art Museum and the Aldrich Museum.

What she is known for: Gangloff is known for her vibrant, brightly colored portraits of her young adult friends or acquaintances. This is her way of sharing her view on modern American life. Her style favors texture and shape over light and depth. The objects, scenery, patterns and textiles are used to help enhance the audience’s understanding of the subject’s interior life.

What’s being said about her: In an article on Artspace, Aldrich Contemporary Art Museum curator Mónica Ramírex-Montagut says about Gangloff’s work:

“Her paintings and drawings make up feel her and her subjects and feel for them as well; they make us feel for ourselves and the period to which we belong. In the midst of the struggles of our current everyday lives, Hope finds both beauty and passion.”