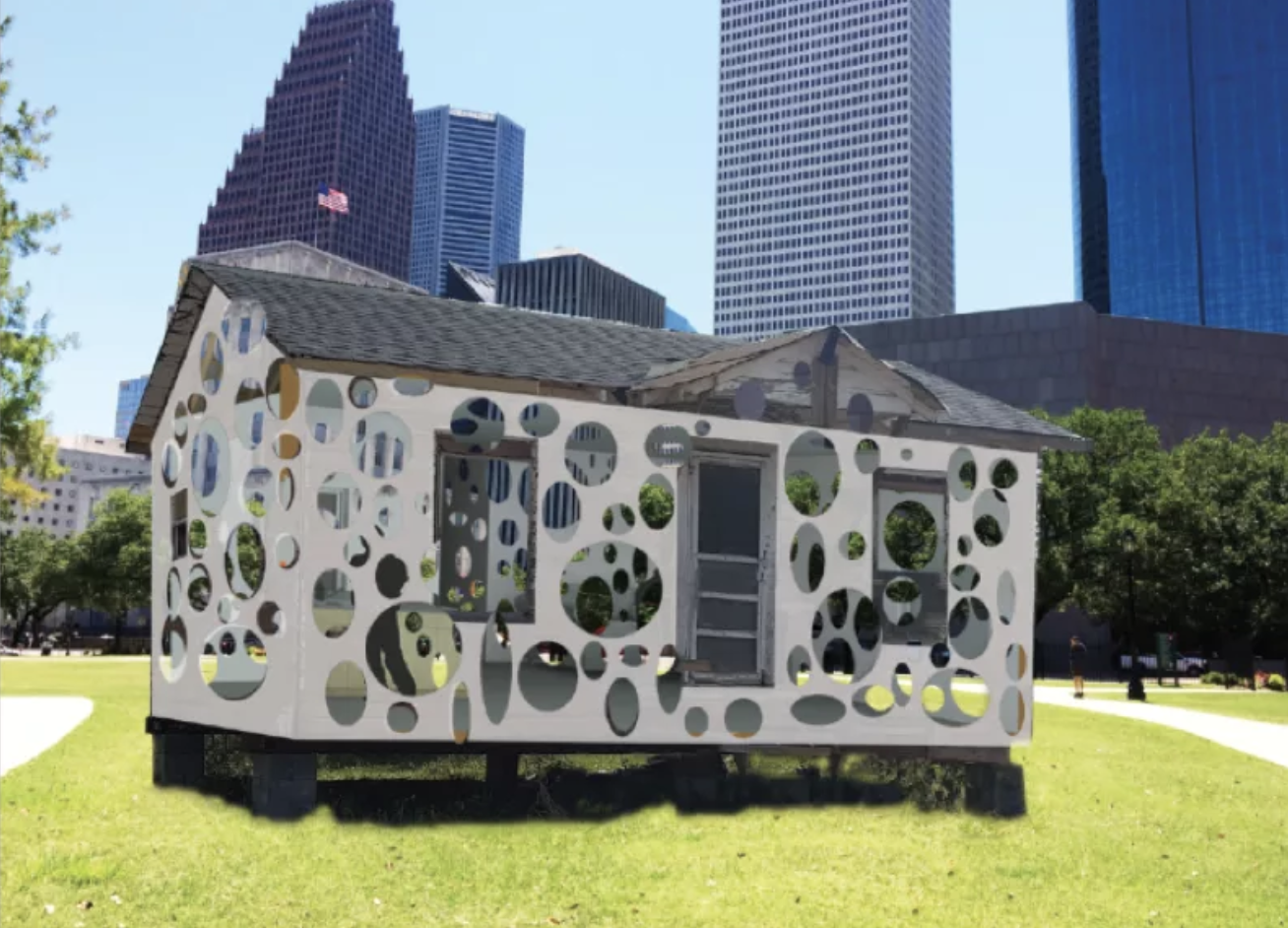 Houstonia: Havel Ruck Projects Has A Literal Take On the Term Open House

Houstonia Magazine features WAG Project “Open House,” part of Art Blocks in Downtown Houston. Writer Brittanie Shey connects the dots between this Havel and Ruck installation at Sam Houston Park, the historic buildings that surround it and the modern skyscrapers that loom near it. Shey writes:

Artists Dan Havel and Dean Ruck have been busy. Fresh off the opening of their latest project, Ripple, a swirling installation in Montrose’s Cherryhurst House art space, the two sculptors are about to start work on another project, this one a partnership with the Downtown District.

Open House will be installed in downtown’s Sam Houston Park as part of the Art Blocks public art initiative. Like many of Havel and Ruck’s installations—notably their explosive 2005 Inversion—Open House will feature the transformation of an abandoned home.

This project will have large round holes cut into it and will be wallpapered inside with historic images. As a result, visitors will be able to walk through the house, viewing both the modern skyscrapers of Downtown Houston alongside images from the city’s past. It’s a fitting addition to the park, which includes other historic homes, such as that of Jack Yates, a freed slave who became pastor of Houston’s first African-American church.

“It’s a perforated house that is almost transparent,” says Ruck. “We like to have this push-pull of scale, bringing people inside the house and also looking outside at downtown. It’s a play on the layering of history.”

Havel has been sitting on the idea for a long time. During a meeting with the Weingarten Art Group, which is consulting on the Art Blocks project, he casually mentioned the idea to founder Lea Weingarten.

“It was pretty much an innocent get-together,” he says, “but her eyes got real wide and she said, ‘I know exactly where to put this!’”

According to the Art Blocks website, the purpose of the project is “awaken change in areas that have not yet realized their full potential.”

“The idea is to engage people in places they wouldn’t normally go,” Havel says. “Dean and I approach these ideas as very site-specific, so we began to ask ourselves, ‘How can we tie that kind of history into the piece?’”

Unlike other Havel Ruck projects, Open House will be accessible during its construction, which is set to being at the end of April and last through June. The house will be fenced off, but park-goers will be able to watch the artists as they work. Havel said that’s an extension of the collaborative nature of the project, in which the artists are working with several groups.

“Ripple was a very quiet endeavor, a very private endeavor,” he says. “With this project, we’re going to have an interesting dialogue with the audience while we’re working.” “We do these projects in order to get that interaction with the audience,” Ruck adds.

Once complete, the piece will be on view through February of next year, and visitors will be able to walk around and through it. After that, it’ll be deconstructed and its components recycled. The park site will be restored to its original state.

Then, Open House will be just another part of Houston’s ever-evolving history. “Memory is a big part of what we do because our pieces are ephemeral,” Havel says.

Construction on Open House is expected to begin the last weekend of April.