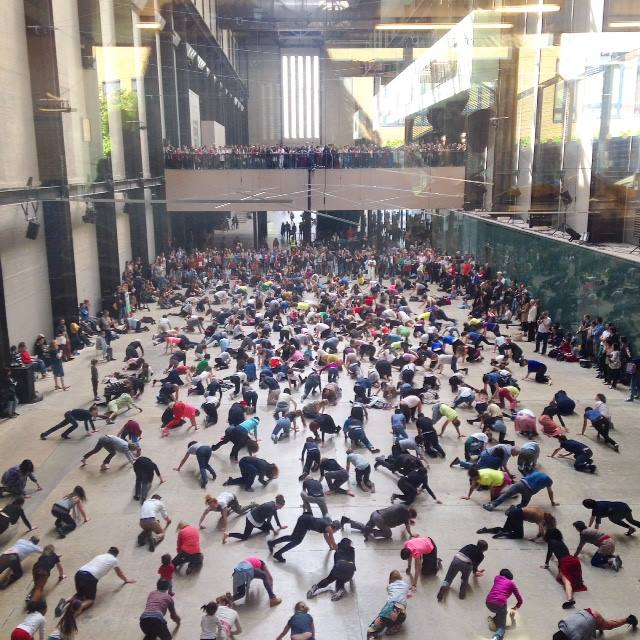 On Mondays, we share our favorite public art works from Houston and around the globe with you. An essential component of our art consulting philosophy, we believe passionately in the transformative power of public art for both the individual and in communities. Check out previous Public Art Monday posts here.

Museum as classic institutions are often thought of as solemn, stern and (because who doesn’t love alliteration) serious. We can compare them to libraries in old legacy buildings where even a drop of a pen is received with frowning disapproval. The rule is: Be quiet and enjoy in silence.

One project, in a way, says enough is enough. Let’s party.

As part of the BMW Tate Live series — a four-year collaboration that features adventuresome live performances and events — If Tate Modern was Musée de la danse? proposes turning the London contemporary gallery into a rave of sorts with a program of dance that answers just that question.

The venture isn’t about bringing in a different art genre into an unexpected space; it’s about how genres can interact to influence how each is experienced, individually and together.

You may recall the enigmatic adage, “Writing about music is like dancing about architecture.” We can interpret this collaboration in a similar way, perhaps “arting” about dance?

To execute the project, the Tate asked four choreographers and thought leaders to imagine what a dance museum would look like. Can a performing art be housed in a museum setting? As the Tate website describes:

Pablo Bronstein reinvents the architecture of Tate Modern; Tim Etchells urges us not to “museumify” dance and instead nurture it as a living, breathing agent for change; Dorothea von Hantelmann looks back at historical interpretations of the museum from writers and anthropologists; and Yvonne Rainer outlines the optimum viewing conditions to allow audience and performer to comfortably inhabit the same space.

In addition, on May 15-16, 2015, choreographer Boris Charmatz led 90 dancers and choreographers in a live “exhibition” with audience interaction. To us, it looks like one heck of a good time.

Watch the video below:

On our Radar: John Houck

On Our Radar: Andrea Büttner