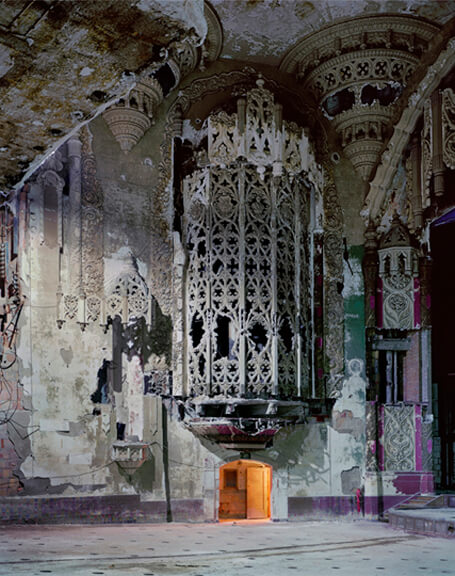 Who: Photographer Andrew Moore from Old Greenwich, Connecticut, teaches in the M.F.A. program at the School of Visual Arts in New York City. He has received grants from the National Endowment for the Humanities, The New York State Council on the Arts and several private foundations.

About the artist: His photographs have been shown at the Whitney Museum of American Art, the Yale University Art Gallery, the Library of Congress, the Israel Museum, the High Museum, the Eastman House, the Canadian Centre for Architecture and the Yancey Richardson Gallery.

WAG recently installed two of his photographs in a Houston home.

What he is known for: Moore focuses on the dramatic visual evidence of the passage of time. He is best known for his vibrant images of architectural and urban scenes particularly in Cuba, Russia and Detroit.

“My photographic interests are stimulated by the busy intersections of history, particularly those locations where multiple tangents of time overlap and tangle.”

He portrays this in his work through the disbanding of the places and objects in a way that is elegant and aesthetically pleasing.

What’s being said about him: In an article on Cleveland.com discussing Moore and his collection of photos entitled Detroit Disassembled, the reporter says:

“Moore has made a specialty out of documenting the architectural and environmental consequences of economic and social upheaval. He’s photographed urban decay in Fidel Castro’s Cuba, the collapse of the Soviet empire and the rise of a desert metropolis in Abu Dhabi. In Detroit, Moore revitalized the age-old tradition of portraying architectural and industrial ruins. Moore brings passion and visual eloquence to his task, along with a keen eye for the rich and complex textures of decay.”

Elevate Houston: A WAG project that inspires everyone to reach for the stars