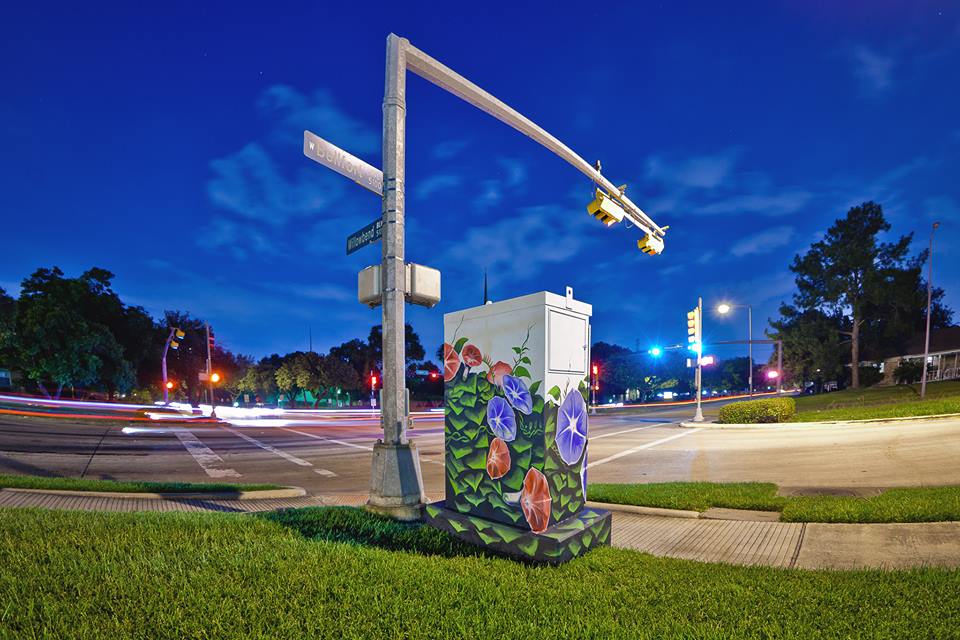 With creativity, imagination and an entrepreneurial spirit, “everything and anything can be transformed into art” — so says prolific muralist and street artist Anat Ronen.

Ronen’s philosophy renders her an ideal artist to participate in the “Mini Murals” project, an initiative helmed by Houston’s UP Art Studio that considers the city itself as a canvas to disseminate art.

Ronen’s utility box, on the corder of Willowbend and West Bellfort, was described by Molly Glentzer of the Houston Chronicle as a “morning glory vine with enormous blooms” in a recent article titled “Mini-murals brighten city, reduce graffiti.” Ronen wanted her creation to make the utility box disappear from the environment, as though it were camouflaged with images from its surroundings.

“Out in the street, for the public, I try to be very responsible,” Ronen says in the Chronicle article. “This project is good because it’s not on deserted buildings or in parts of town people won’t ever see. The neighbors get to see us, and we get to see them; it’s like an exchange of worlds.”

As Elia and Noah Quiles of UP Art Studio so succinctly put it, the project turns blight into art. Considering there are 2,400 available traffic signal control cabinets throughout Houston proper, the project shows incredible promise.

Image: Courtesy of UP Art Studio. Photo by Morris Malakoff.