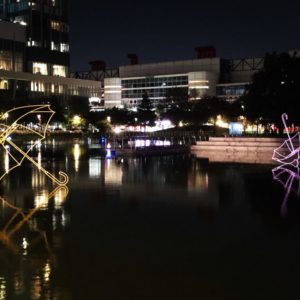 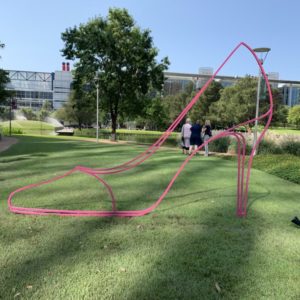 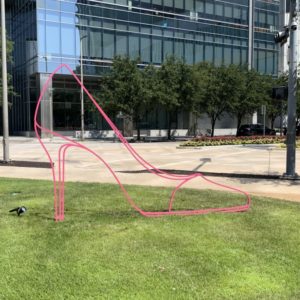 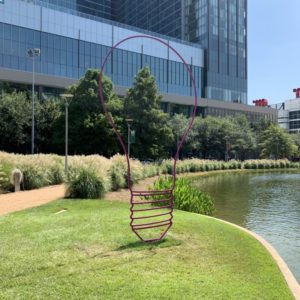 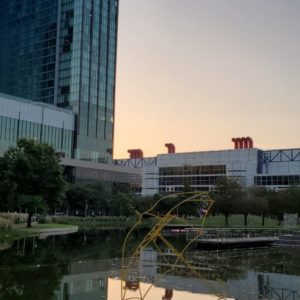 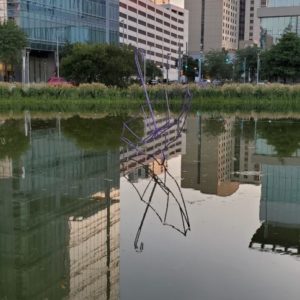 The Shape of Things: Michael Craig-Martin at Discovery Green

The first exhibition of British artist Michael Craig-Martin’s sculpture in Texas, and only the second venue in the United States, The Shape of Things features six bold and imaginative sculptures showcased around Discovery Green’s Kinder Lake. The colorful, oversized steel forms offer a playful perspective of everyday objects and challenge our perception of space, appearing like line drawings in the air. Depicting everyday objects such as an umbrella, a wheelbarrow, a light bulb, and a shoe, these larger than life works are playful and evocatively simple. Visitors can walk around the pieces at Discovery Green, observing the extraordinary sculptures in a new context.

Craig-Martin (b. 1941) is an Irish-born, U.S.-raised, London-based contemporary artist. He attended the esteemed Yale University’s School of Art and Architecture from 1961 to 1966, where he studied alongside Chuck Close, Brice Marden and Richard Serra. He returned to Europe in the mid-1960s, where he became both a key figure in the first generation of British conceptual artists, and had a strong influence on the Young British Artists (YBAs) that graduated from Goldsmiths in the late 1980s. Since his time at Yale, Craig-Martin’s work has been based on a growing visual vocabulary of everyday objects. He has explored the form and symbolism of these items through a variety of media including line drawings, paintings, large-scale installations, prints and, since 2011, powder-coated steel sculptures. His highly recognizable style is marked by rigorously precise lines in bright, vivid colors.