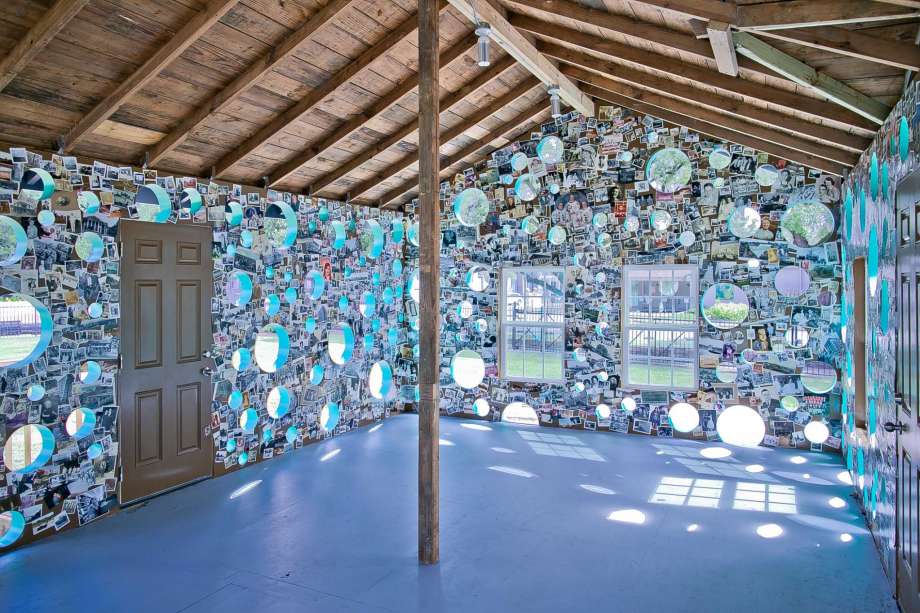 Houston Chronicle: Inside the new holey house in downtown Houston

“Open House” is modest, tiny even. This project is the latest house-transformation by the two artists, Dan Havel and Dean Ruck, known for similar collaborative works since 1995. The house was brought to its downtown location and set on a platform. Then the artists worked a series of dramatic changes to it. From a distance, it holds its original, easily read character, “house.”

It even has white-painted trim, as if to show domestic pride, like so many houses in the neighborhoods do.

“Open House” is near City Hall, and near the downtown end of Buffalo Bayou Park, a busy place of outdoor recreation and play, of skateboarding and baby strollers. The “Open House” location is, by contrast, subdued. It is tucked in the Heritage Society’s section of Sam Houston Park. Here, a collection of dwellings from the city’s early life is gathered oddly on a sloping lawn. The houses are disconnected from both the park’s sounds of enjoyment and the enormous blue-green glass wall of skyscrapers across Bagby. “Open House” stands out here, an odd bird at the hinge of different Houstons.

Havel and Ruck are masters of transforming the arbitrary and interchangeable nature of Houston into specific places. Their work always touches the past, especially its most intimate, neglected corners.

Their work has a temporal nature. The works have an end date. Few pieces of their most prominent works are preserved. The medium they choose, houses slated for demolition, guarantees this. They’ve commented that memory is the best way of recording the projects. Everyone will have a different impression of “Open House.”

A great contrast comes when I step through the door of the house. The inside walls have been pasted with a skin of historic photos. They fan out in a brown and grey quilt. All of the 20th century is represented. They are a wonder to behold. Faces, groups, and places look back at me.

Dislocated from name and identity, the photos resonate with pride and struggle. These are all the shapes of the consumer snapshot, with a few more formal shots. Dan Havel tells me of the process of accumulating the pictures, which were gotten through donations and the resale shop. Then came hours spent handling the photos, spreading them in arrays on the wall, and gluing them down. “I’m still discerning all their aspects,” he said.

Sharon Engelstein in the Park