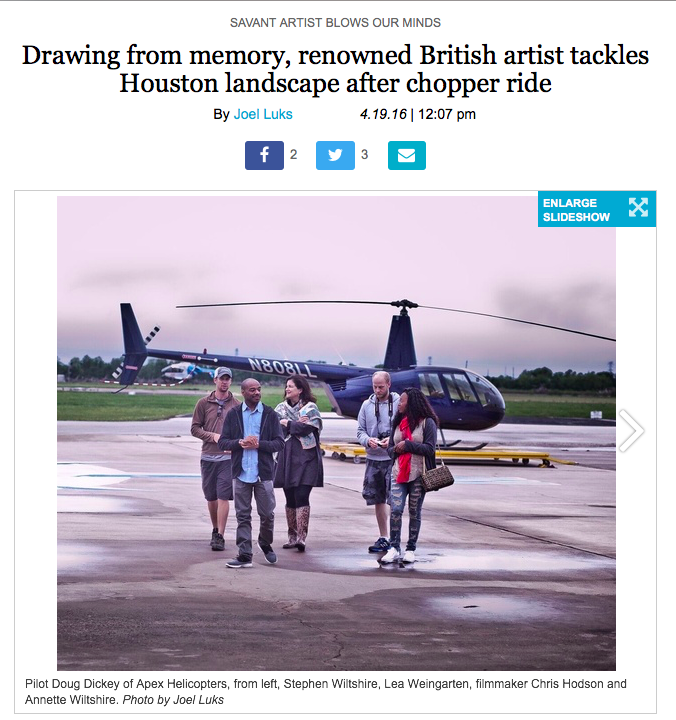 In case you didn’t catch him sketching away at the Galleria for “Elevate Houston: The Big Picture,” Stephen Wiltshire completed his 3-foot by 12-foot panorama of Houston’s Bayou City this Saturday.

The artist worked feverishly from 10 a.m. to 5 p.m. for five days, only stopping for a one-hour lunch break. However, the long, tireless hours aren’t nearly the most exciting part of the project. Wiltshire completed the drawing entirely from memory. He embarked on a 45-minute helicopter tour in Tilman Fertitta’s luxury chopper to survey the city from a bird’s eye view before beginning the project. The drawing was not a mere outline of what he saw, either. Wiltshire has the ability to precisely recall an immaculate amount of visual details after studying his subjects for relatively short amounts of time.

“Stephen’s work is uniquely inspiring on a myriad levels,” Lea Weingarten said about the project in a CultureMap article. “Not only are his cityscape interpretations beautifully accurate and genuine, but also his passion for his art adds to the emotional prowess of the finished works. Stephen’s art speaks to everyone.”

To check out the panorama, the completed work will be displayed in a public venues around Houston, alongside a video that chronicles his Bayou City adventure, before being returned to the lead underwriter of the Elevate Houston project.

Prints of the drawing will be available for sale; proceeds will benefit KIPP Houston Public Schools.

CW 39 Asks Orly Genger About her Boys Cry Too Installation