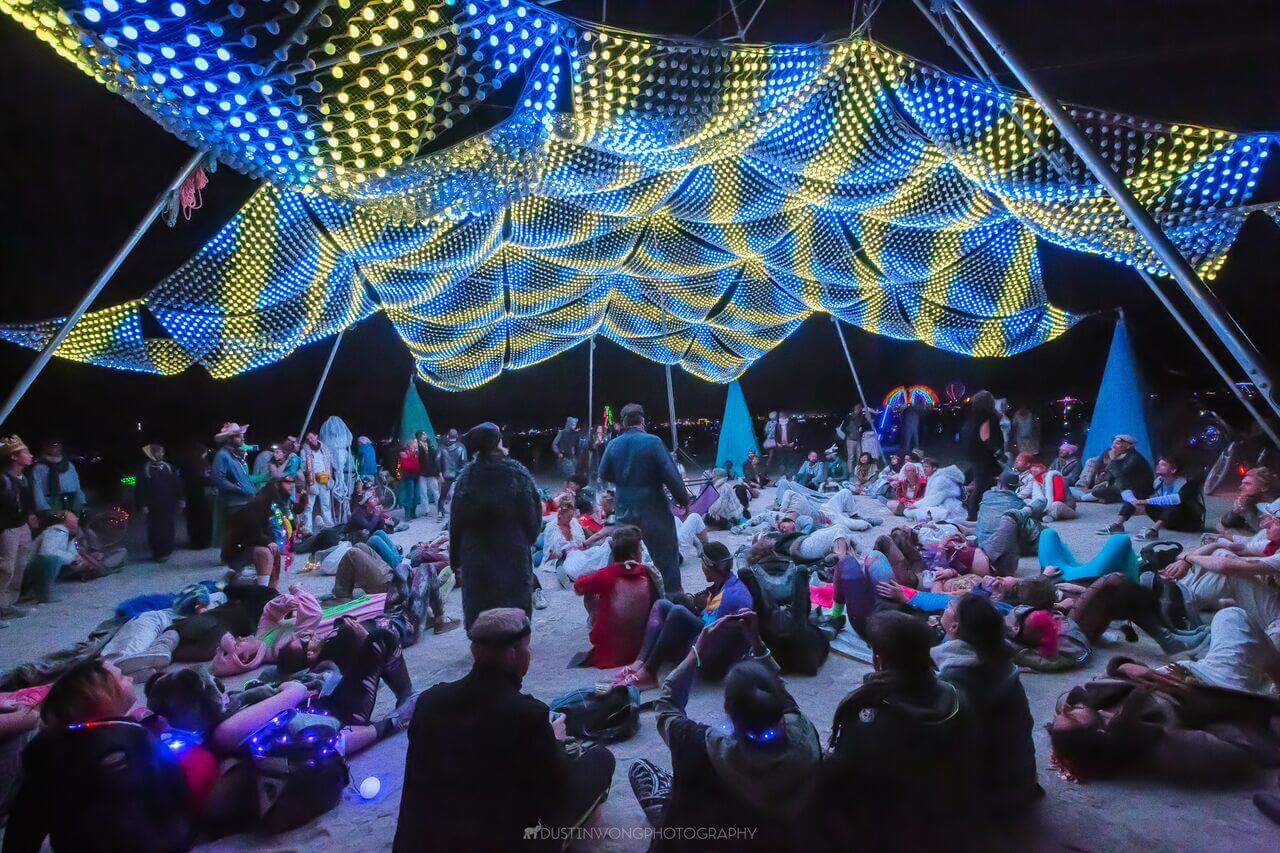 Acclaimed Burning Man artist Christopher Schardt is lighting up Discovery Green beginning Nov. 22, 2016. His installation, Firmament, a is 52-feet wide, 42-feet high canopy of 21,600 LED lights. Passersby are invited to gather under the celestial, psychedelic structure to engage with the enveloping artwork.

Schardt aims to create work that inspires connections and interaction—we received more info about the installation and the inspiration behind it from the man himself.

Q: Finish this sentence and expand: Art is a vehicle for . . .

Christopher Schardt: Art is a vehicle for communicating a concept, some facts and/or a feeling. This is obvious in the case of writing, but holds true for painting, sculpture and other non-verbal art forms as well. In my opinion, it is solely up to the piece of art to affect this communication. If a plaque explaining the concept is required, the piece has failed to do its job. I very much prefer art that moves or informs all by itself.

Q: When you debuted this work at Burning Man in 2015, did you ever expect the response it received?

Christopher Schardt: I knew the piece was pretty, but I didn’t expect the audience to move in! I was surprised and moved by just how much people loved it and felt at home under it. I was surprised how classical music at low volume was able to seal out the constant thump-thump of electronic dance music that is everywhere else at Burning Man. I was charmed when people started assembling to lie underneath it the moment I turned it on, with still plenty of twilight. I found out this year that some people called it “Permanent” since many folks were reluctant to leave.

Q: As an artist, how does that impact you?

Christopher Schardt: One night in 2015, I was at the piece taking photos of the LED canopy, my head deep inside the process of finding the right camera angles. The “Valse des Fleurs” waltz from The Nutcracker was playing. When I was done shooting, I looked around and found that everyone in attendance was waltzing. I shed tears of delight as I shot a video of it:

I was moved to tears at other times, too, such as when I found out that weddings had happened under the piece.

Christopher Schardt: What I’ve learned from two of my Burning Man pieces is that the best public art pieces are also places. They don’t just have something to see or hear, they provide a pleasant milieu that invites the user to stay a while, not because there’s something more to see, per se, but because it feels good.

Q: What are some of the technical elements of the work that were challenging/interesting to execute?

Christopher Schardt: I love the second step of my design process, which is getting all the shapes that I’ve been kicking around in my head into a CAD (Computer Aided Design) model. To be able to see what I’ve been dreaming of is such a thrill. I also get to find out which shapes don’t work. Seeing the piece in 3D projection also shows me design possibilities I hadn’t dreamed of yet.

After the design is done, I think about the technical details, such as the wiring. This can be a great challenge, but it’s quite enjoyable to the engineer side of my brain. Part of the challenge is knowing what components are available. During every project, I learn about new stuff I can use.

Q: What are some of the engineering feats?

Christopher Schardt: The forces that the design of Firmament needs most to withstand are sideways forces due to wind. The LED canopy is quite light and is made of mesh, but a strong wind can still pull it to the side with some force. The canopy is held together with 1/8” wire rope (aircraft cable) and custom triangular shackles. Real engineering analysis of these shackles was done to make sure that sideways forces of up to 1,000 lbs could be withstood.

Christopher Schardt: Originally, the piece was going to be much more interactive and technology-filled. It was going to have motion sensors of some sort that would detect everyone below it and how they moved. A randomly-chosen image would be displayed for each person, following them around as they moved.

I described this to my father, a landscape architect, on a hike one day. He said, “I think you may not be on the right track here. What you’ve got is a dome of lights that display stars, planets, aurora borealis, Hubble photos, the entire firmament!” His idea resonated with me immediately, as did the name, “Firmament”.

Houston Chronicle: Discovery Green will light up briefly with moonGARDEN