About the Artist: Born in 1942, Katherine Bradford is a New York City native with a painting studio in Williamsburg, Brooklyn and another in Maine. She attended Bryn Mawr College and holds an MFA from SUNY Purchase. Katherine Bradford came to painting later in life, but her interest in the art world began at an early age. From Hyperallergic’s 2016 Beer with a Painter interview:

“Also, on the coffee table in the living area of the Glass House was a life-size hamburger, which of course was a Claes Oldenberg sculpture…Even though I was 12 years old, I thought it was a great work of art — witty and courageous. In that town, to have a hamburger on your coffee table was just wonderful! I knew I needed to find out more about this world where people make hamburgers as works of art.”

What she is known for: A cast of characters – including Superman, a swimmer, a bike rider, a ballet dancer – anchor Katherine Bradford’s painting style. In the previously quoted Hyperallergic interview, she says of her style, “I began as a mark-maker and I wanted to stay somewhat in that vocabulary. I didn’t want to get into the tradition of figure painting or use perspective or shadows. I like spare, simple paintings.” Katherine Bradford’s signature figures are gestural, personal, and often delightfully awkward. They play out their human dramas through their interactions, or lack thereof, with each other and their vibrant cosmic environments.

What’s being said about her: Early this year, Katherine Bradford exhibited six new large-canvas works at Sperone Westwater Gallery in New York. Referred to by Bradford as “nocturnes,” these pieces place her figures in darkly painted voids and recall similar treatments in works shown in her 2016 CANADA exhibition. Faye Hirsch of Art in America says:

It is precisely the figures’ finitude in relation to something bigger than themselves that gives Bradford’s paintings their particular pathos. To make the struggle believable, she has to make the “bigger” gorgeous and unfathomable, seductive and threatening all at once. The stakes are high, and Bradford grows ever more daring.

Yet Bradford contests she isn’t wholly darkness and pathos at the moment. Her iconic colorful brilliance may be returning in her next project, which according to an interview with Art Writing will be a traveling show including artists Chris Martin and Peter Acheson and curated by Phong Bui of the Brooklyn Rail.

Last year, The Weingarten Art Group acquired “Superman USA,” a 2015 Katherine Bradford piece. Lea Weingarten spotted the painting in Adams and Ollman’s booth at the NADA art fair in Miami. She was drawn to the painting’s uplifting and hopeful quality, and says that it felt like a breath of fresh air from the political work saturating the rest of the fair. The piece is beautifully representative of Bradford’s figurative style and painterly, thickly-built surfaces. Fortunately, the piece was the last one still available. Every other Bradford at the booth had already sold. 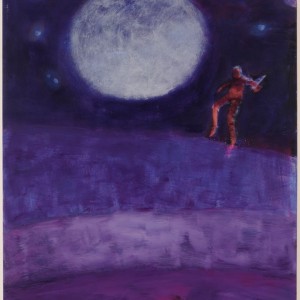 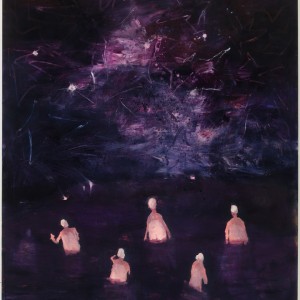 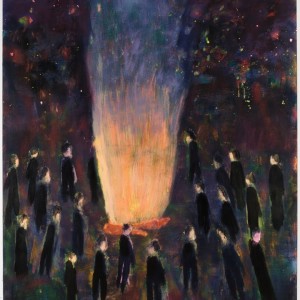 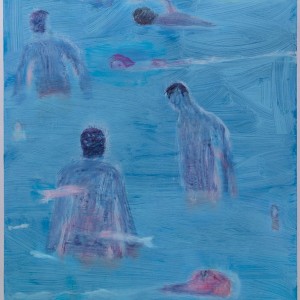 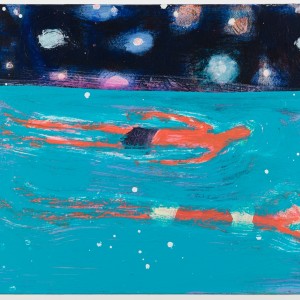 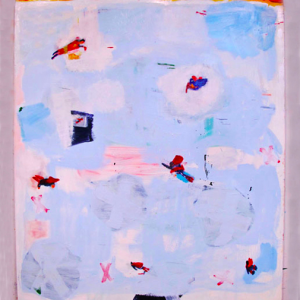 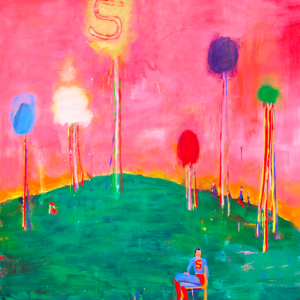