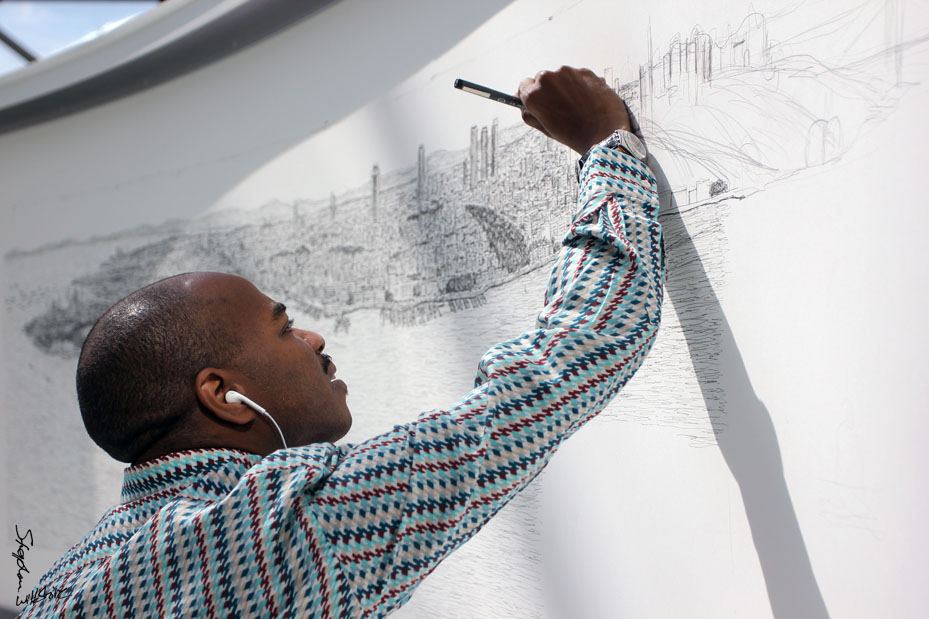 About the artist: London-born artist Stephen Wilshire (Stephen Wiltshire Gallery) discovered his artistic inclination at an early age which, luckily for those who have had the chance the observe and and appreciate his work, he embraced. He is a one-of-a-kind landscape artist who studied fine art at City and Guilds of London Art School and was awarded an MBE for services to the art world in 2006.

What he is known for: Stephen Wiltshire is known for drawing and painting detailed panoramic cityscapes. The catch, though? He creates these accurate representations entirely from memory.

Wiltshire’s scrupulous memory and inherent artistic ability allow him to view the scene once and interpret it in exacting detail. He recalls details in his works such as particular nuances of cityscapes including windows, elevations and decorative architectural elements that many people would not take note of after one viewing.

What the artist is showing: During his debut visit to Houston, Stephen will create a remarkable panorama of the Bayou City live at the Galleria. The five-day project, “Elevate Houston: The Big Picture,” will take place April 19-April 23.

Wiltshire will be taken on a helicopter ride during which he will have the chance to study the city’s iconic architecture and scenery. The following day, he will commence work publicly at the Galleria where he will spend seven hours each day sketching the three-foot-tall by 12-foot-wide Houston panorama.

What’s being said about him: Wiltshire was featured in UK’s The Telegraph’s documentary titled “Extraordinary People” and is referred to in the piece as “The Human Camera.”

In an article on Daily Mail, reporter Geoffrey Wansell writes:

Wiltshire is a ‘savant,’ a man trapped in his own private world but with an exceptional talent, said to be one of only 100 diagnosed throughout the world. In fact, it is only his gift as an artist that has allowed him to communicate fully with other people — and, as a result, the film-makers have called him ‘The Human Camera.’

10 things you should know about Frieze London Art Fair