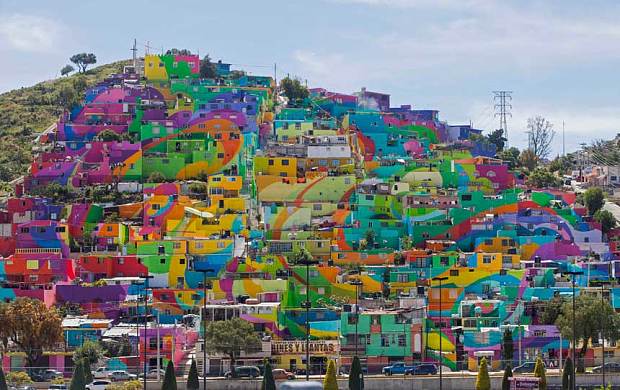 The art collective Germen Crew has officially given new meaning to the popular adage “paint the town” and the group means it.

In an effort to reinvigorate an underserved neighborhood in Mexico, the collective executed a mural that covers 215,000 square feet with 5,280 gallons of paint. The piece, titled El Macro Mural Barrio de Palmitas, took more than two months to complete.

According to the Telegraph:

They hope the project will help inspire young people in the area to use art as a means of self-expression. As Germen Crew member Uriel del Rio told Al-Jazeera: “Graffiti, art, and its history have transformed us and allowed us to avoid…bad decisions. From our experience, we propose it can change the lives of others.”

More than 450 families and 2,000 people have seen their homes transformed into a colorful display. ArtNet News reports that the initiative was designed as a community builder that deters crime activities. The design was led by Mibe, a Mexico City-based street artist.

According to All That is Interesting, “El Macro Mural Barrio de Palmitas will reap cultural and economic benefits for years to come. When Juzcar was painted blue to promote the Smurfs film, tourism exploded exponentially. Palmitas will likely see a similar flood of new faces.”